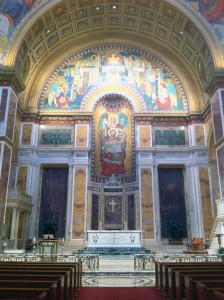 The altar at the Cathedral of Saint Matthews the Apostle

The wedding ceremony will be held at the Cathedral of St Matthew the Apostle in Washington, DC.

The ceremony will begin promptly at 2:30pm, and will be a full Nuptial Mass, including Holy Communion. In accordance with the Sacramental Norms and Policies of the Archdiocese of Washington, non-Catholic Christians cannot receive Holy Communion at a Nuptial Mass.  But, we do invite everyone to share in this blessed ceremony, as we profess our love for one another to God and to our loved ones.

Why the Cathedral of Saint Matthews the Apostle?

María and José both have a cherished history at this cathedral.  As children and young adults, they both attended mass at St. Matthews, so it only seems fitting that they start their lives together at the church where they worshiped for many years.

María and her sister both sang in the St. Matthew’s Spanish language choir for several years, and María’s family were parishioners for the better part of a decade.

José’s family were dedicated parishioners of St. Matthews in the 1980s.  His parents were married and his brothers were both baptized there.  José completed his first communion, confirmation, and served the cathedral as an altar server.

The Cathedral church and parish is named for Saint Matthew the Apostle, the patron saint of civil servants, recognizing all those who serve in the municipal, state, and national governments and the many international organizations located in the metropolitan area. The church is the seat or cathedra of the Archbishop of Washington. As the Mother Church of the archdiocese, it plays a major role in the Catholic life of the nation’s capital.

The funeral Mass for President John F. Kennedy was celebrated in the Cathedral on November 25, 1963 with many international heads of state and governments in attendance. In 1979, Pope John Paul II celebrated Mass in the Cathedral during his visit to the United States. Annually, on the Sunday before the first Monday in October when the Supreme Court of the United States begins its regular term, a special Mass is celebrated praying for the Holy Spirit to guide all those who are members of the legal profession. Known as the “Red Mass” in reference to the vestment color, the Supreme Court justices, members of Congress, the President’s Cabinet, diplomatic corps, local municipal, state and national government leaders, and sometimes the President of the United States join the celebration.

The Cathedral is located at 1725 Rhode Island Ave., N.W., just off the intersection of Connecticut Avenue, Rhode Island Avenue, and M Street in Northwest Washington and about four blocks from the White House.

The Cathedral does not have a parking lot. Limited street parking is available and several parking garages are located next to and across the street from the Cathedral.

The nearest Metrorail stations are Farragut North (L Street exit) and Dupont Circle, both on the Red Line. Please note that the Dupont Circle south exit is closed until October 2012. Several Metro bus routes stop at Connecticut Avenue and M Street to the west of the Cathedral and at 16th and M to the east of the Cathedral. For further Metro information, visit www.wmata.com or call 202.637.7000.