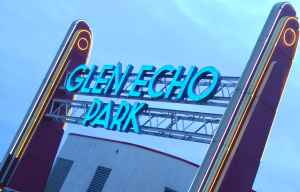 Glen Echo Park is a magical place situated on the Potomac palisades near Bethesda, Maryland. Its origin dates back to 1891, where it began as a National Chautauqua Assembly, which taught the sciences, arts, languages, and literature. By the early 1900s Glen Echo Park had become a premier amusement park, serving the Washington area until 1968. Today, the park is host to many resident arts and cultural organizations, artist studios, a thriving social dance program, a restored carousel, and numerous classes in visual and performing arts.

María and José are overjoyed to treat family and friends to the celebration of their love and future lives together. In the spirit of this historic and festive venue, a wonderful evening has been planned for reception guests:

From downtown Washington, take Massachusetts Avenue in the northwest direction, to its end at Goldsboro Road. Turn left, and continue to MacArthur Boulevard. Turn right on MacArthur Boulevard and take an immediate left onto Oxford Road where you will see the Park’s main parking lot.

A free parking lot for Glen Echo Park is located just off MacArthur Boulevard on Oxford Road, across from the Glen Echo Shopping Center. From the parking lot, follow the foot-bridge across the Minnehaha Creek to enter the Park.

Via public transit, take the metro to Friendship Heights Metro Station and catch the Ride On 29 to Bethesda-Glen Echo.  Get off at Goldsboro Rd and MacArthur Blvd.  Please note, the Ride On only runs until 8:30pm on Saturday, and you will need to take a taxi to get back to the metro.  Since Glen Echo is a mere three miles away from Bethesda (or four miles from Friendship Heights), you may want to consider taking a taxi from either metro stop.