Happy New Year, from our family to yours! We welcomed the new year with a very low key dinner gathering at my mom’s, in the company of my parents and our family’s three dogs: Louis, Baci and Toby. The pups did not disappoint, and as expected, provided us with hours of entertainment, chasing and wrestling one another to their hearts’ content. Not surprisingly, they were the first to checkout for the night, succumbing to exhaustion and sleep by 9pm. 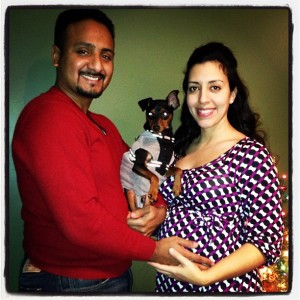 This night was particularly memorable for Jose and I as it marked a pretty fantastic milestone in my pregnancy. First let me set the scene. We had just settled down on the couch at home, with a piece of pecan pie and vanilla bean ice cream, and with just 15 minutes before midnight, tuned into the NYE countdown broadcast. Up until this day, I hadn’t really felt obvious sensations of movement from the baby. I might have felt some flutters a few days prior, but nothing that stopped me in my tracks with the realization of “this is it”! But on this night, no more than 5 minutes after our last bite of pie and ice cream, the baby started dancing and kicking furiously, in an obvious response to the sugar rush. To make the moment even sweeter, I quickly placed Jose’s palm on my upper belly and he was able to feel all of the activity for himself! What a treat! Our new year was off to the most amazing start – a sweet and tender moment with our little miracle, the purest expression of our love.

How can one possibly top a honeymoon adventure as magnificent and magical as the two weeks we spent in Thailand and the Maldives? We certainly couldn’t think of anything, unless you consider the wonderful news we received just a few weeks after returning home to DC. 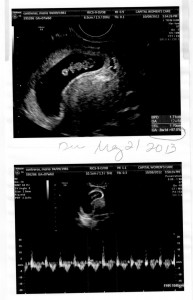 Our little family is gaining a new member! Yes, Toby will be getting a new sibling, a little partner in crime, expected to arrive in late May 2013!

We feel so incredibly blessed and overjoyed for this next chapter in our lives together – being newlyweds and expectant parents! We’ve had to contain our excitement for many weeks, first sharing our news with our immediate families, and then slowly revealing our little secret to our extended network of friends.

There will be more to come as we document some highlights of our journey as expectant parents, culminating with the spring arrival of our little one! 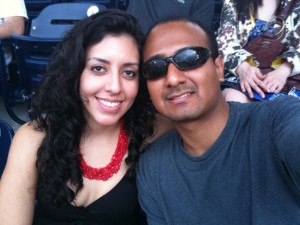 For our first baseball game this season, we were joined by Maria’s dad, Efren, and sister, Jennifer, for the ‘Battle of the Beltways’ – Washington Nationals vs. Baltimore Orioles. 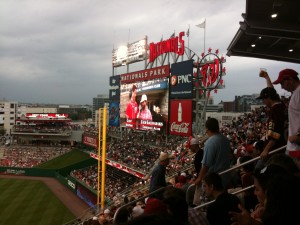 Later that evening, we headed over to the 9:30 Club,  in the U Street corridor and grooved to the irie reggae sounds from Steel Pulse! Not only was this Jose’s first time at the 9:30 club, but it was also our first time going to a concert together. Needless to say, the reggae rhythms evoked all kinds of gyrations and movements from the crowd. We soon found ourselves feeling overheated and crowded, but the music was in one word, amazing! 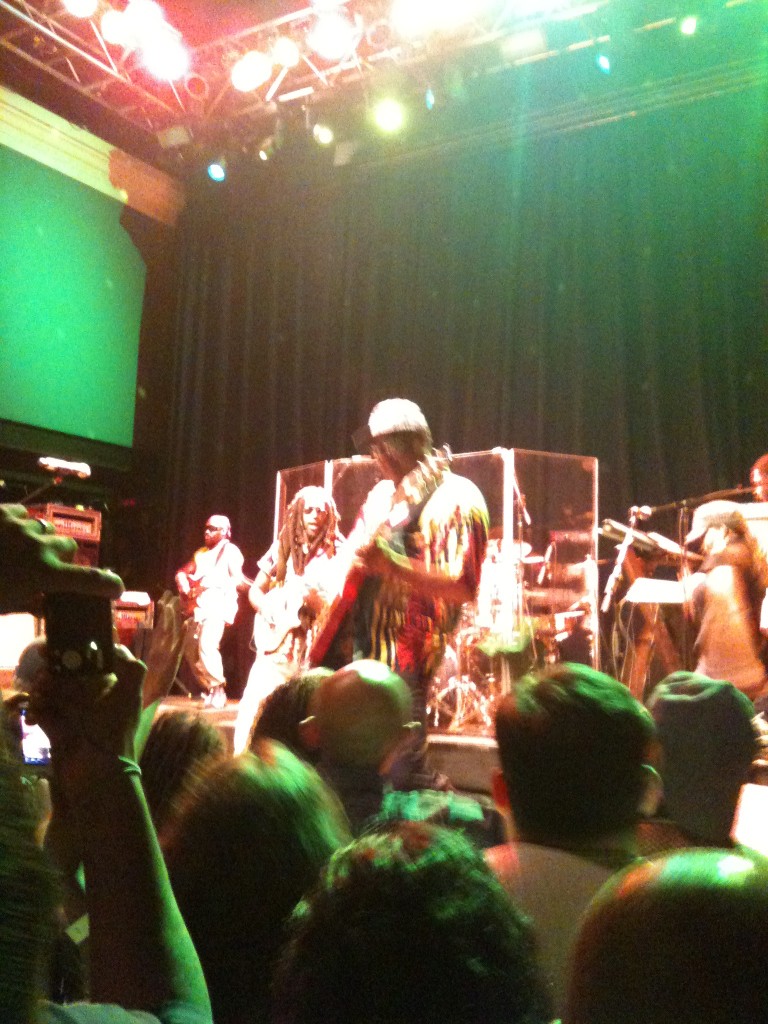 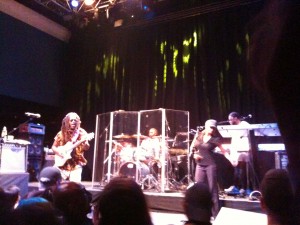 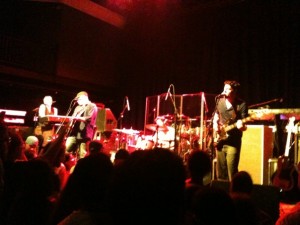 We spent the afternoon on the Mall with Jose’s cousins, Nicholas and Christian practicing our kite flying skills. Well, in reality, we probably spent more time running up and down the Mall attempting to get the kite to catch a decent gust of wind, than any actual kite flying. It was a gorgeous spring day, perfect for kite flying and the boys seemed especially eager to run down and tackle Jose.

We eagerly participated in the March for America rally on the Mall, and joined thousands of protesters from both near and far, to demand immigration reform by Congress. It was a beautiful and unusually warm spring day, but all the better to join our friends and lend our voices on behalf of undocumented immigrants across the United States. 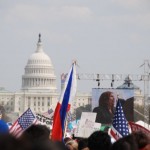 A view of the crowd with the Capitol in the background. 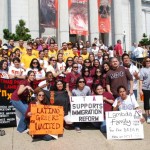 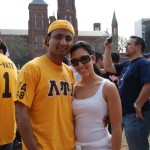 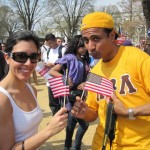 That evening we met up with my mom, Luz,  and my sister, Jennifer, for mass at Sacred Heart Church (16th St.) – yes, this was Jose’s first time meeting one of the parents!

Our Big Apple adventure kicked off with our first mission: to score tickets for the Broadway musical, “In the Heights,” from the TKTS booth at the South Street Seaport. We not only scored tickets to some great seats, but we were also rewarded with some amazing views of a gleaming Brooklyn Bridge. After a quick and impromptu photoshoot with the bridge serving as a backdrop, we realized it was time to grab lunch, so we dropped into Cabana’s for a quick Cuban meal before heading to Midtown for the next leg of our adventure.

Feeling energized and satiated, it was time to explore King Kong’s favorite NYC landmark, the Empire State Building. Several lines and multiple elevator rides later, we arrived at two observation decks: the first on the 86th floor and the second on the 102nd floor. From these heights we snapped some pretty spectacular panoramic shots of the city, both downtown and uptown, and we even spotted our friend Tony’s condo building, located across the river in New Jersey! After bidding adieu to King Kong, we headed to the Rockefeller Center, more specifically to Morrell Wine Bar & Cafe, to meet up with our friends Karoliina and Jonathan. Our night wrapped up at Camarada’s in Spanish Harlem, where we met up with our friends June, Jose and Tony, and sampled Puerto Rican delicacies and sangria, while also enjoying the live bomba/plena music.

The next morning we grabbed a quick breakfast at ‘La Unica’ bakery just a short walk from Tony’s condo, in Union City, NJ, before heading back into the city and catching the show. An amazing show capped off what was a fun-filled weekend in the city for this budding romance! 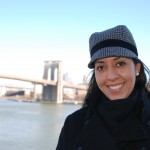 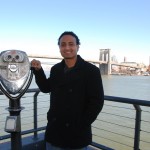 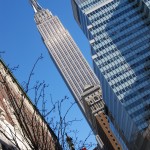 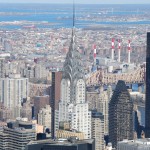 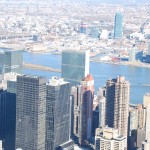 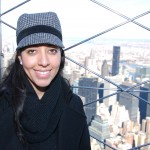 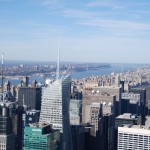 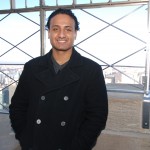 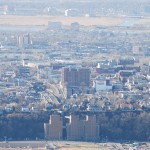 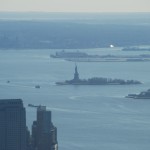 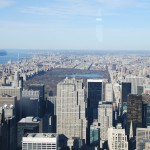 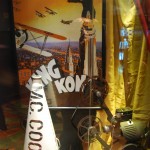 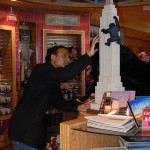 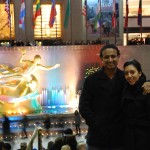 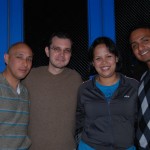 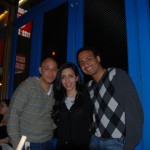 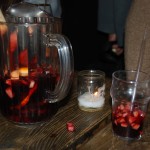 We celebrated our first Valentine’s Day as a couple with an activity-filled day in downtown DC. Our day started with a scrumptious brunch at the rooftop restaurant of the John F. Kennedy Center for the Performing Arts, followed by an afternoon of discovery at the National Museum of the American Indian (NMAI).   We not only learned about the different varieties of cacao, and it’s various uses in the native american populations, but we were also treated to performances by Folkloric Peruvian dancers who dazzled us with their acrobatic “Scissor Dance.”

Since I was preparing to run the ING Miami Half Marathon, the following weekend, Jose offered to join me for my Saturday morning 10 mile training run, and even proposed a route along the fairly quiet Sligo Creek trail, in Silver Spring, MD.  I was excited to try a new route, but even more excited to discover that Jose was quite the runner himself! Nearly two hours later, with our run completed, our tired muscles were treated to soothing deep tissue massages, and nutritious protein shakes, at the nearby mall in Wheaton.

However, our second date did not end there…

That same night we met up with Jose’s friends, June and Lino, for a night of Latin dancing, at The Salsa Room, in Arlington, VA, where a fundraiser was being held to collect funds for earthquake disaster relief efforts in Haiti. We danced until our tired legs and feet couldn’t take it anymore, but had a fantastic time in the process, dancing to classic salsa, merengue and bachata tunes. 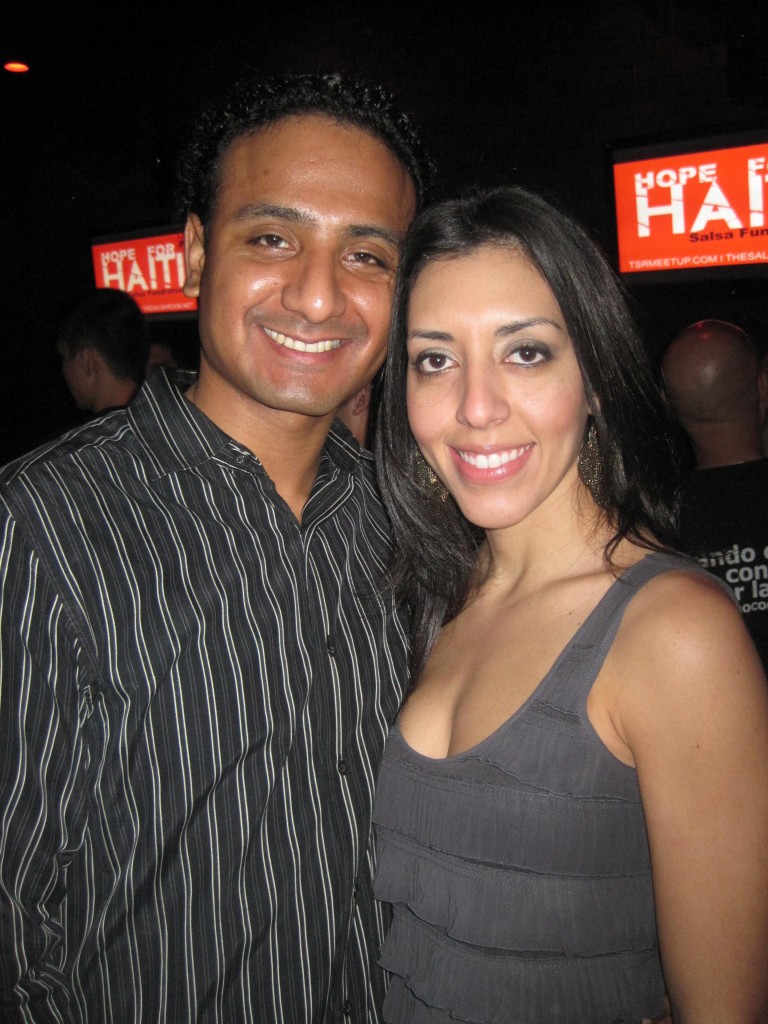 Taking a much needed break from dancing!