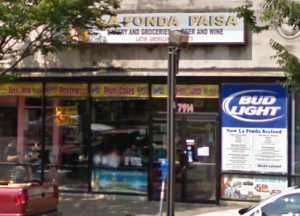 Just over a week after that fateful encounter at Posh, and after about 2 weeks of exchanging Facebook messages, we agreed to meet at La Fonda Paisa in Silver Spring, MD, for a typical Colombian breakfast. This would be our first opportunity to really converse and get to know each other a little better, face to face.

Surprisingly enough, I wasn’t  the least bit nervous in the few hours leading up to breakfast.  Somehow, I think our previous exchanges over Facebook helped ease any nerves that are otherwise normal for a first date – I was very excited to get to know him in person.

I arrived a couple of minutes before him, so I went ahead and ordered a glass of passion fruit juice to sip on in the meantime. About 5 minutes later, I was surprised to see him walk through the back entrance of the store, as I had been expecting to see him pull up at the front, on Georgia Avenue.

We got our breakfast platter and started chatting … and chatting … and chatting … next thing we know, we’ve been conversing for 3 hours! He had a meeting at 1pm, and had to get going.  I was bummed to have our date end, but excited about the obvious connection and chemistry between us. Before leaving, Jose decided to show me where he had parked in the back lot, in case I ever had trouble finding street parking on Georgia Avenue. Much to our surprise, his car had been towed! I was in disbelief – I think more shocked than him – not what one would expect to happen on a first date! Jose handled it all very well (meaning he didn’t lose his cool), and he called to find out where to pick up his car. Maybe the fates were in cahoots to buy me a few more minutes with him, and I certainly was not about to pass on the opportunity to do so.  So I gave him a ride to the lot where his car had been stored, about half a mile away, in Silver Spring.

This site uses Akismet to reduce spam. Learn how your comment data is processed.