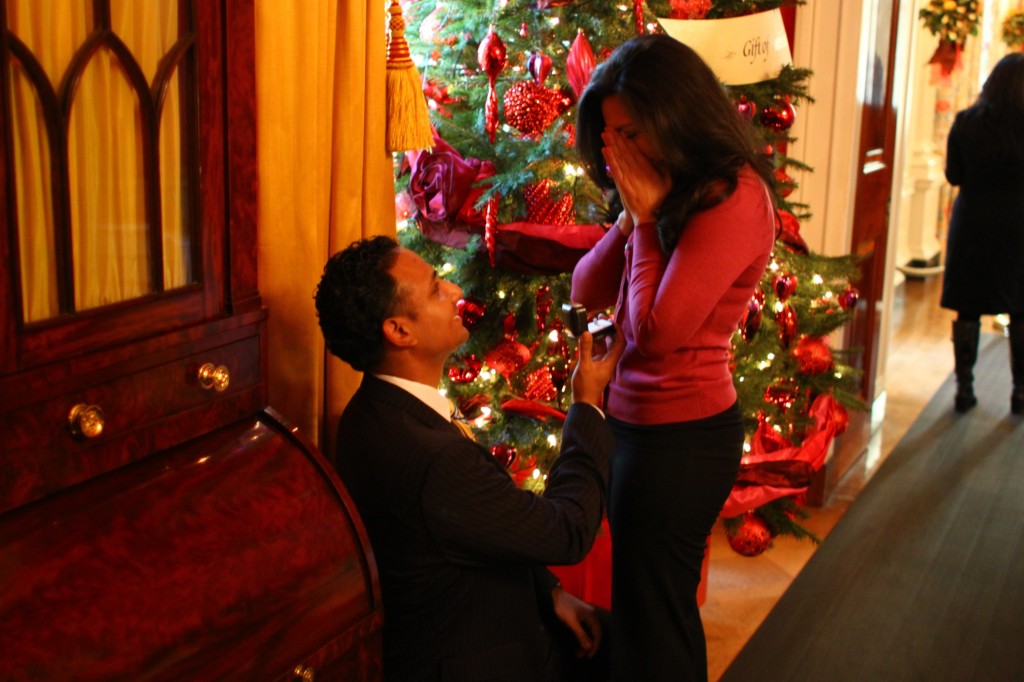 Well….. It finally happened! I finally mustered up the courage to ask María the all important question, “Will you marry me?” In fact, that’s all I really had to say. Usually you can’t shut me up. However, I had no time and was too nervous to dream up something long winded and epic. Besides, the act itself was epic and noteworthy. For those of you who have been asking for details, here is the unabridged story of how I came to propose to the love of my life, María Fernanda Garcia, in the Red Room of the White House.

When we last left our hero, he had just become the Lord of the Ring (not two, not three, just one) and was plotting a way to propose to such a special woman.

A minor annoyance becomes a pleasant coincidence
When I ordered the ring I was told it would be ready in about 10 days.  About 10 business days had passed and I had begun to wonder what the deal was with the ring.  As if on command, I receive a voice-mail from the the jeweler telling me that my ring had come in and I could pick it up whenever I was ready.  SCORE!!  I could pick it up the next day and then — Oh crap!  I have to go to this White House thing….  Oh…. wait….  I have  to go to the WHITE HOUSE!!!  The gears start turning.  The vision starts out foggy, but begins to clear up.  We’re walking through the White House, the proposal is grand, the President congratulates me and an era of peace and understanding spreads throughout the world!

Reality sets in.  Is this way too over the top and cheesy?  Would I get ridiculed like the Salahis on Real Housewives of DC (blame the fiancée for that reference).  Ok scratch that, we actually were confirmed to be on the list.  But, how would I get past the metal detectors without taking the ring out and risk spoiling the suprise?  I needed some outside advice.  I send June a text asking if I should do it.  She responds, “yup.”  I send my LB Tony a text and he says, “F@ck yea.”  Forgive him, he gets excited sometimes.

Most importantly, I hadn’t asked her parents for her hand in marriage.  Okay, for those of our fans who haven’t figured it out, María and I come from very traditional Latino families.  I gchat, text and finally call my friend Susie to get one last vote of confidence on the idea.  So I’m on the phone with her as I am leaving work to go pick up the ring.  She asks me if I had asked María’s parents for her hand in marriage.  I tell her that I hadn’t and that it was weighing heavily on my mind.  I had envisioned taking them out to dinner (public settings are a good choice to avoid a scene, just in case), but since this idea popped into my head literally less than 18 hours ago I couldn’t quite make that happen.  Of course she reminds me of how important that occasion is to the parents of the bride-to-be, especially in a Latino family.  So she bluntly tells me, “get off the phone with me and start calling her parents!”

Asking the parents
As I am waiting to pick up the ring I am texting María’s parents.  Her mother replies first thinking something is wrong. I don’t think I had ever texted her before.  I tell her nothing is wrong and that I just needed to talk to her about something important.  María’s dad was at work, so I wasn’t sure if I could get a hold of him in time.  I’m thinking this might be an exercise in futility.  Maybe I was starting to get cold feet about the whole idea of proposing at the White House.  Maybe it was all too rushed.  Perhaps I was worried I would forget a detail.  Then her father calls back.  I had rehearsed the convo in my head multiple times, but I wasn’t sure how to apologize for doing it over the phone and asking for his permission at the same time.  After apologizing a few times and explaining the urgency of my predicament the words finally come out.  I asked his permission to propose to María.  I think he was as nervous as I was!  He immediately replied yes, but seemed at a loss for words.  According to María, he is the quiet type, but a real softy.  He welcomes me to the family and I thank him over and over again.  That wasn’t so hard!  I tend to get along with fathers anyway.

Next up, querida Mamá Luz!  In a way I was glad I got the easy one out of the way.  I had the father’s permission. According to Latino Macho Code, this is a decision amongst men.  Of course, I knew that would not fly whatsoever.  María’s mom had tried calling me while I was on the phone with María’s father.  So, I call her back and start my bumbling apology again and end my nervous monologue by asking her permission as well.  She asks me, “are you sure you want to marry my daughter?”  I tell her of course!  She begins to tell me, it’s not something one takes lightly.  I tell her I am in total agreement and want nothing more than to spend the rest of my life with her daughter.  I guess she had to make it seem a  little tough on me.  She tells me she is about to give her daughter away.  I tell her she isn’t losing her daughter, she is gaining the son she never had!! Y que negrito ese nene! Of course she tells me that she holds me in high esteem and welcomes me to the family.  Yes!! I can breathe again!  And just in time!  I’m pulling into my parking lot to meet María so we can head to the White House.

Recruiting an accomplice
Operation “Put a Ring On It” was now a go!  Step one would be to figure out a way to get “The Item” through security without detection by the “Primary Target,” María Fernanda García.  Were I to carry “The Item” on my person it would surely set off the metal detectors and would have to produce “The Item” in prior to its scheduled unveiling.  I would have to recruit a capable asset to carry “The Item” through security and handle the process to clear “The Item” past security.  Besides the “Primary Target” my only known contact at the White House would be our dear friend Desiree, who invited us on this Holiday Tour.  As the “Primary Target became distracted by something I quickly flash Des “The Item” to let her know my intentions.  I immediately begin to chat her up so she has time to calm down and process what is about to occur.  As we get past the first two checkpoints (yes, our names were on both lists) I slip “The Item” into her purse. María and I go through security first.  She starts to walk towards the pictures and I join her and begin to chat about the pics and make sure she keeps facing forward,  Meanwhile my accomplice works her way through security.  She shows the Secret Service the ring and we make our way to the White House.

Choosing the room
Prior to this day, I hadn’t been in the White House since I was little boy and came here on a school field trip.  I remember there being a bunch of different colored rooms, but had no sense of what was where.  The girls must have thought I was really intrigued by the tour program.  It was nice and all, but I was looking for the perfect room to propose to María.  As I read the descriptions I felt drawn to the Red Room.  I know, I know, red is the color of love.  Red is a Christmas color.  I guess it was really a no brainer.   But, I needed to be sure.  I wanted to get a look at all the rooms and then go back to the room I felt was the most appropriate.

After having gone through all the rooms I finally decided the Red Room was going to be the setting of our very special moment.  We had made our way to the State Dining Room, so I asked Des and María to double back and take a picture by the Christmas trees in the Red Room.  I had dropped hints that I wanted to double back to the other side of the room.

María suggested that we take off our coats for this picture.  Maybe she felt a premonition.  Maybe The Fates inspired her to prepare for a special moment.  She hands her coat to Des and I hand my coat to Des as I try to retrieve the ring from her purse.  We struggle to find it since it was placed in another pocket of her purse when she went through security.  María moves in to see what’s holding things up!  Oh no! Near disaster.  Just as María moves in we find the ring and I retrieve it before she sees anything.

We move on to taking pictures.  The first picture is a normal Xmas picture by the tree.  I tell Des to take another picture just in case.  As Des gets ready to take that picture, I drop to one knee and ask María a question…

WILL YOU MARRY ME??

She cups her mouth in surprise and says, “YES!”

Paparazzi
Prince William and Kate, The Kardashians, Brad and Angelina, José and María, we all had to deal with the paparazzi.  It just so happens that as this moment unfolded it was captured by Toby Knapp of Hot 99.5.  I recall hearing all these clicks behind me, not knowing that the media is documenting our moment.  Desiree gets business cards from Toby, Tim and Dan, our first set of paprazzi.  Many thanks to them for taking the pictures.  I’m sure historians will be glad they were able to capture history in the making.

To make things even more interesting it seems that they talked about the proposal on the radio!

The following morning I receive an email from one of the bros with the following link: Toby Knapp – Dude pops the question in the Red Room of the White House

Needless to say, word began to spread amongst our friends.  We raced to tell those closest to us either by phone or by text or by email.  We are excited to begin this new phase of our life and begin preparations for a 2012 wedding!

2 thoughts on “The Proposal”

This site uses Akismet to reduce spam. Learn how your comment data is processed.